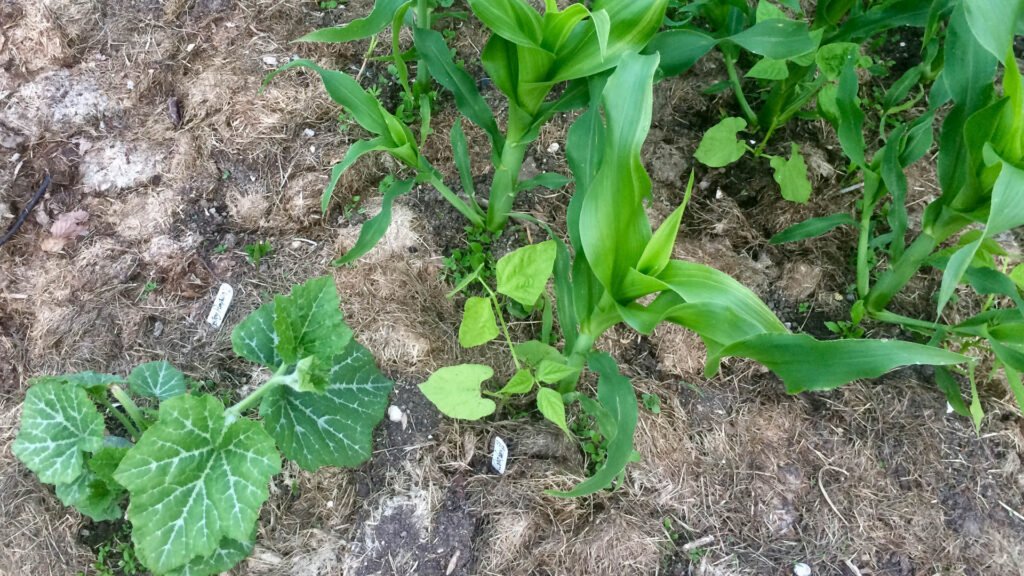 The three sisters guild, consisting of corn, beans and squash, is one of the oldest known methods of companion planting, utilised by the Native Americans over 3000 years ago. It is called this because the plants support each other and thrive together, much like three good sisters. The tall, strong corn supports the climbing beans which in their turn catch nitrogen in the air and feed the excess back into the soil, supplying essential nutrients for the greedy corn. The squash acts as a living mulch, regulating the ground temperature, suppressing weeds and holding in moisture. The prickly leaves can also deter some pests.

Traditionally the guild would be planted in the Spring (often with a dead fish buried under the corn to initiate supply of nutrients into the soil) and left until the Autumn when the grower would return to bring in the harvest for winter. This was very convenient as the corn would be dried and used for flour, the beans would be dried and rehydrated for use when needed and the pumpkins, with their thick skins, would store well for months.

My first version of this guild will be a little different as I intend to harvest the beans and corn for use while fresh.

My second version of this partnership is a lot less traditional. While I am still using climbing beans, they will be supported by giant sunflowers rather than corn (sunflowers, like corn, are heavy feeders and will appreciate the extra nitrogen) and instead of using pumpkin as my squash sister I will be using courgettes. This bed will also feature nasturtiums which are a great companion plant as they not only attract pollinators but will also act as a ‘sacrificial crop’, tempting aphids away from the beans and sunflowers.

Alongside my cordon tomatoes, I have planted marigolds to both attract pollinators and deter aphids. This type of marigold is especially useful as it acts as a ‘green manure’ and can be chopped into the soil after it has flowered to improve the quality. I have also planted basil as it too deters aphids as well as reportedly improving the taste of the tomatoes it is grown next to.

With my bush tomatoes, I have planted marigold (for the reasons above) and borage. Borage is said to repel tomato hornworm, improve the flavour of tomatoes and add trace minerals into the surrounding soil. It is also a great bee-friendly plant.